Nasal rinsing (or spraying) with hypertonic saline can help with allergies or colds by washing out mucus, allergens or germs that cause infection and allergy. 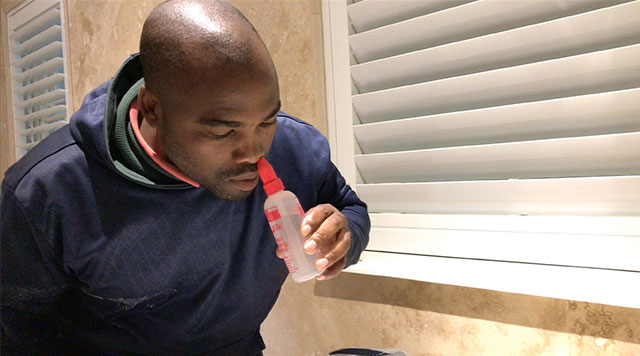 Prepare the rinsing solution as instructed. Hold your head upright over a basin. Introduce the nozzle gently into one nostril. 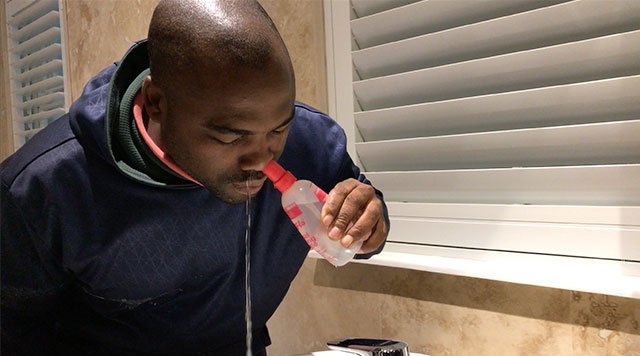 Tilt your head slightly towards the other nostril. Slowly squeeze the bottle. Allow the solution to flow into one nostril and drain through the other. 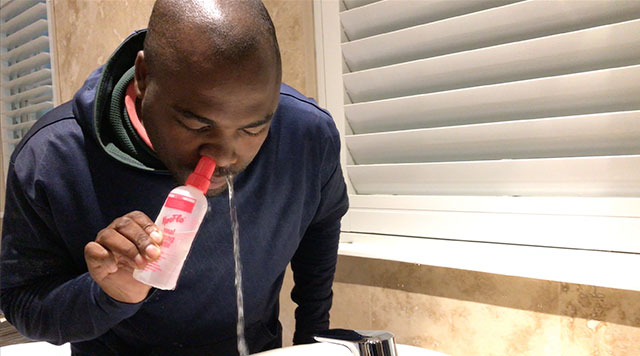 Repeat for the other nostril. Discard leftover solution and thoroughly clean the nozzle and bottle after a rinsing session. Let it air dry and store in a clean, dry place.

Throw away any leftover solution and thoroughly clean the bottle. Let it air dry and store in a clean, dry place. You may see results after just one or two rinses and the longer you rinse the better you will feel.

Can my child’s nasal condition develop into something more serious? 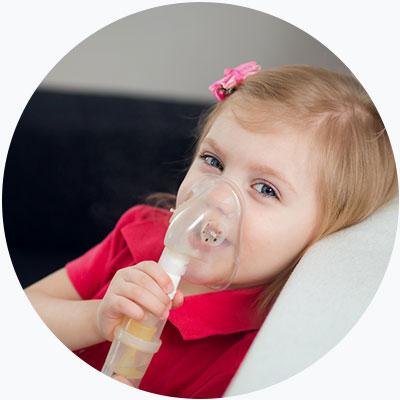 Can my child’s nasal condition develop into something more serious?

Yes, it can. Children can develop sinus infections if the condition is not attended to. A hypertonic nasal rinse or spray for children cleans viral particles, pollen, bacteria and dust before their effect on the nose is so severe that it results in complications.

In addition nasal conditions can have effects on the lungs as well. Thick secretions from the nose and sinuses can drip into the lungs and lead to worsening of the condition. A blocked nose forces the child to breathe through the mouth and it thereby loses the air conditioning function of nose and sinuses. Dry, cold, dusty air inhaled directly into the chest via the mouth can also have negative consequences on the lungs.

How often should I wash the nebuliser?

How often should I wash the nebuliser?

Wash thoroughly with soapy water and rinse properly after each use.

Why does my baby sneeze? 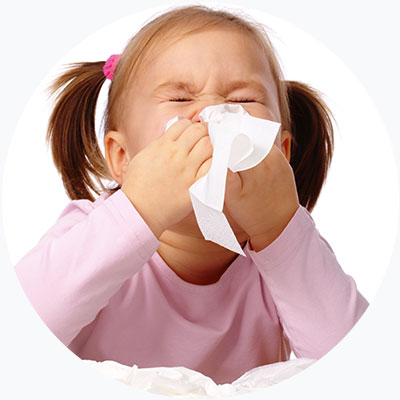 Why does my baby sneeze?

Sneezing is a baby’s natural way of cleaning the nasal cavity. Any irritation in the nose like dust, excessive mucus, smoke, pollen or dry secretions can trigger the sneeze reflex. Like coughing for the lower airways, sneezing is an important cleaning mechanism for lower and upper airways.

Hypertonic saline as spray into the nose or nebulized helps soften secretions or dissolve irritants. This leads to a more productive sneeze or cough. 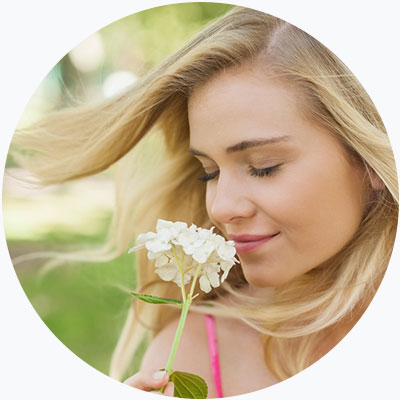 Corticosteroids are anti-inflammatory drugs. When they are given systemically as an injection or in table form their use should not be prolonged because this is associated with severe side effects on the rest of the body. Physicians often prescribe corticosteroid nasal sprays particularly for patients with allergies. They are safe to use on a daily basis and over long periods. These sprays reduce chronic inflammation of the mucosa (mucus membrane) in nasal passages and sinuses. They also help by reducing itchiness and sneezing.

What causes rhinitis or sinusitis? 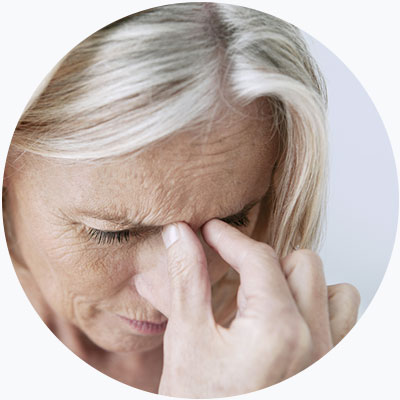 What causes rhinitis or sinusitis?

In rhinitis or sinusitis the membranes in nose and sinuses respectively are inflamed. The cause is usually a viral infection or common cold. Infections move easily from nose to sinuses since there are no valves preventing the spread. If a viral infection is not cleared the circumstances in nose and sinuses may become conducive for bacteria to also grow and multiply. This is called a superinfection.

Allergy can also cause rhinitis and so can pollutants, dust, chemicals, smoke and any other foreign material in the nose. A foreign body such as a bead or a piece of plastic in a child’s nose can result in a pussy and often bad-smelling nasal discharge which looks like sinusitis.

Fungal infections of the nose or sinuses are rare. 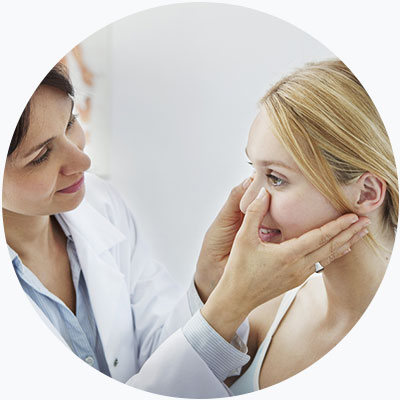 A sinus is an air-filled cavity surrounded by bone and connected to the nose via small air channels. Any condition or disease affecting the nose can easily spread to the sinus cavities.

The word ‘sinus’ is however often used to describe a congested, snotty, runny or even itchy nose. It is even used synonymously for hay fever. This leads to great confusion between patient and doctor and often results in the wrong diagnosis being made and the wrong treatment given. It is therefore advisable to stick to terms like ‘blocked nose’, ‘runny nose’, ‘headaches in face and around the eyes’, ‘ itchy and sneezy nose’ etc. when describing your symptoms to the doctor.

Can I rinse if my nasal passages are completely blocked or if I have an ear infection or blocked ears? 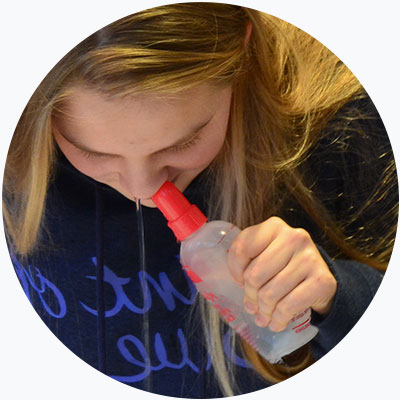 Can I rinse if my nasal passages are blocked, if I have an ear infection or after sinus surgery?

The blockage of your nose would be caused by mucus, crusts, foreign material or swelling. Hypertonic rinses will help with all of these. Initially you might find it frustrating since the solution does not go all the way through to the throat or the other side.

Especially after sinus surgery regular rinsing is the mainstay of postoperative treatment. Crusts, blood and clots should be rinsed out to facilitate healing and prevent infections.

Can I rinse with tap water?

Can I rinse with tap water?

Rinsing your nasal passages with plain water will result in discomfort. If no salt is added it will actually lead to swelling in the nose and have the opposite effect of what you want to achieve. Never use tap or faucet water unless it has been previously boiled and cooled down.

Can I microwave the rinsing bottle? 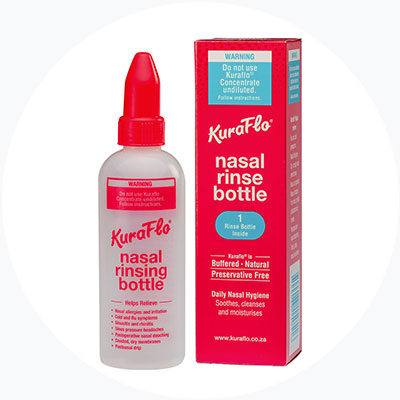 Can I microwave the rinsing bottle?

It can be warmed in the microwave, with the cap left off. You will have to determine the time needed to warm the solution. Try increments of 5 to 10 seconds to find the right temperature. Do not overheat, as this may damage the bottle or scald your nasal passages.

Alternatively put the bottle into a jar with hot water for some time.

Is there any discomfort associated with nasal rinsing?

Is there any discomfort associated with nasal rinsing?

You might initially feel a slight stinging or burning sensation but this should go away after a few rinses. It is similar to swimming in the sea and some water enters your nose. Make sure the water is at body temperature as this makes it more comfortable.

What if the fluid doesn’t come out my other nostril when I rinse? 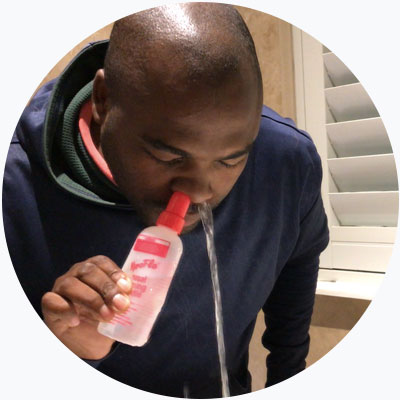 What if the fluid doesn’t come out my other nostril when I rinse?

There are different techniques for nasal rinsing. The solution may go into the one nostril and out the other one. Alternatively it may come out through the mouth. Some people prefer to squirt it into the one nostril and let it come out the same side. It certainly takes a few tries to find the technique that suits you best and master it. Don’t let initial difficulties discourage you.

Hypertonic means stronger than our bodies own salt concentration, which is 0.9%. Hypertonic saline has decongestant effects on the membranes by drawing water from them. The higher salt concentration can kill microorganisms. It also leads to prolonged mucus production by the nose which has a more lasting cleansing effect.

Should I use a decongestant for my baby? 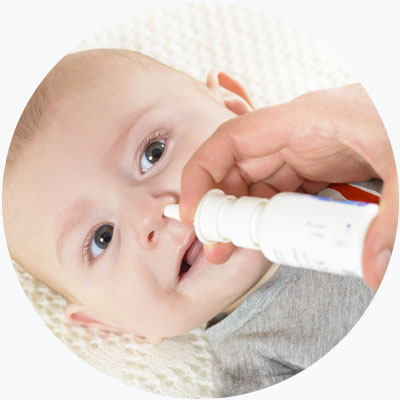 Should I use a decongestant for my baby?

Decongestants can dry up mucus and block nose, sinus canals, Eustachian tube and even the small air channels in the lungs (bronchioles). Antihistamines may cause sedation and thicken the discharge which is the very last thing you want for your baby. A hypertonic saline baby nasal spray or nebuliser will offer much more effective and affordable relief. Cleaning of the nasal passages helps reduce the impact of infections and may even prevent infections from taking place.

When your baby’s nose is very blocked and hypertonic saline alone is not effective, topical application of decongestant drops is advisable. This is usually only necessary at night to ensure comfortable nasal breathing and thus a peaceful sleep.

Why should I rinse daily? 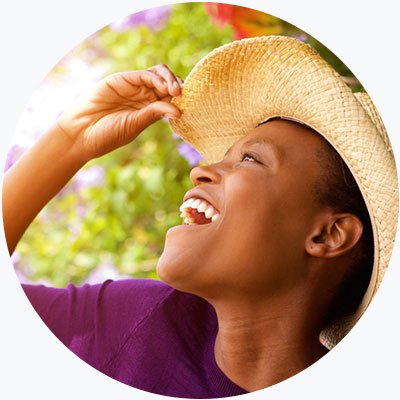 Why should I rinse daily?

The regular use of a saline nasal wash can soothe, moisturise, and help keep the nose, sinuses and Eustachian tube openings clean and healthy. Doctors and scientists have found this procedure safe and effective. When done correctly, nasal washing can remove irritants, particles and debris keeping the passages clear and the membranes healthy. It is also a great way to moisturise especially in very dry climates or when subjected to air-conditioning.

How to rinse
Page load link
Go to Top